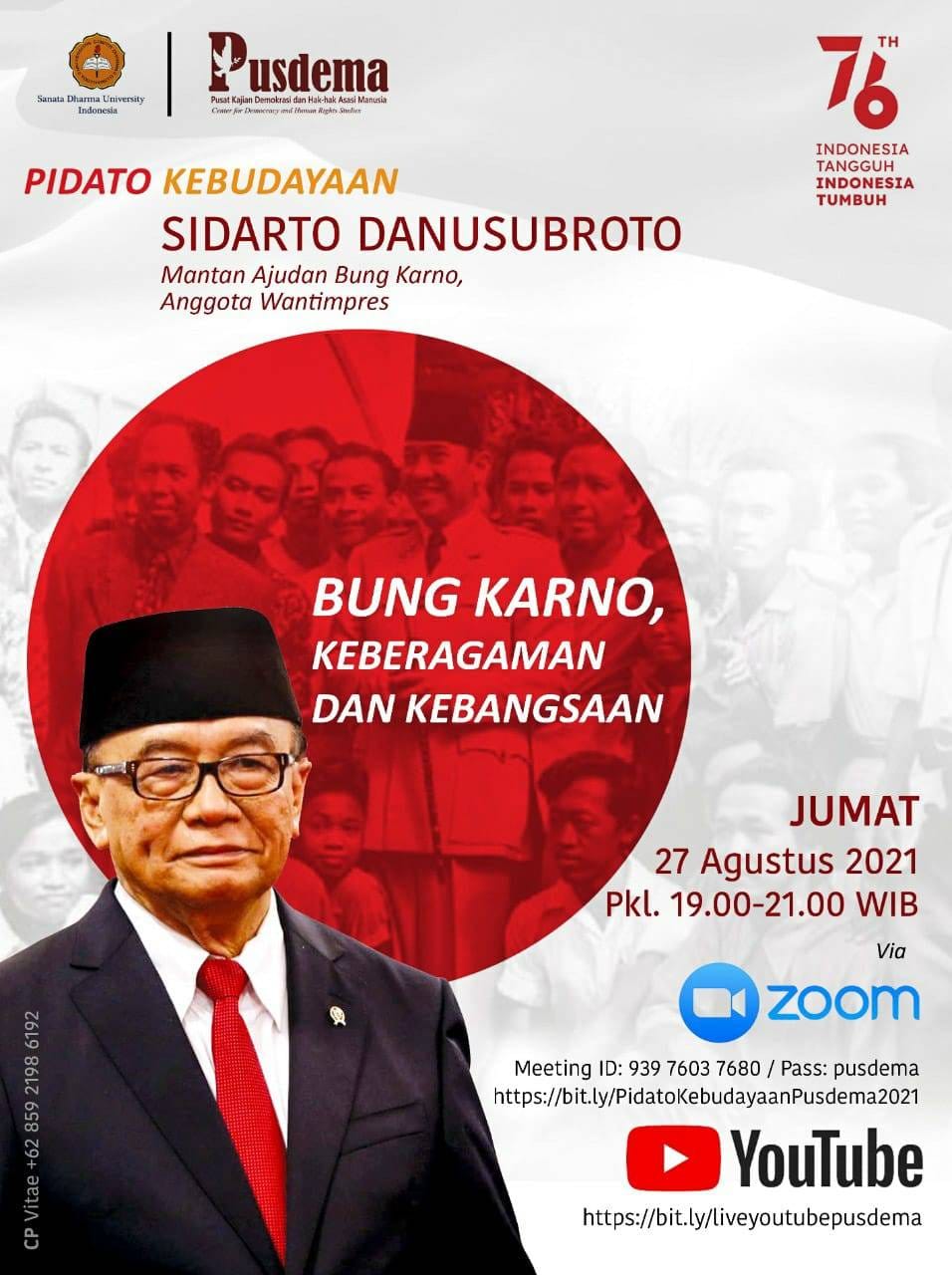 Member of the Presidential Advisory Council, Sidarto Danusubroto, who was also Bung Karno’s last aide, delivered a Cultural Speech with the theme Bung Karno, Diversity and Nationality. The Cultural Speech was organized online by the Center for the Study of Democracy and Human Rights (PUSDEMA) of Sanata Dharma University on August 27th, 2021.

In his speech, Sidarto conveyed that this year, Indonesia commemorated the 76th Indonesian Independence Day. The independence of Indonesia can be achieved through the struggle of all Indonesian people and indeed with the role of national figures who fought so persistently. Some of the nation’s figures are: Bung Karno, Bung Hatta, Syahrir, Tan Malaka, and others.

Talking about Bung Karno is always interesting and relevant throughout the ages. The figure of Bung Karno is not only owned and admired by the Indonesian people, yet has also become an idol for many circles and has become “the property of the world”. Even the figure of Mahatir Muhammad’s level (Former Prime Minister of Malaysia) proudly calls himself “Little Soekarno”.

Bung Karno passed away while still maintaining his ideals, leaving behind various thoughts and concepts, such as Pancasila and Trisakti, which made Indonesia highly valued and had an honored place in the views of other countries. Trisakti which is described as “Sovereign in politics”, “Independent in economic”, and “Personality in culture” is the formulation that Bung Karno explored during the encounter of imperialist attempts to destroy Indonesia.

As a nation, Indonesia’s diversity is a gift, the Indonesian people should never forget the history (JAS MERAH: Jangan Sekali-sekali Melupakan Sejarah). The founding fathers established this country for all tribes, ethnicities, religions, and groups in Indonesia. This nation and state is not only for certain groups, still according to Bung Karno: “one for all, all for one, and all for all”. Bung Karno’s thoughts are very relevant to the condition of Indonesia as a pluralistic, multicultural, multiethnic, and multireligion nation. When ‘all feel for all’ then no ethnicity or religion would feel more entitled than others. All children of the nation have the same rights and obligations.