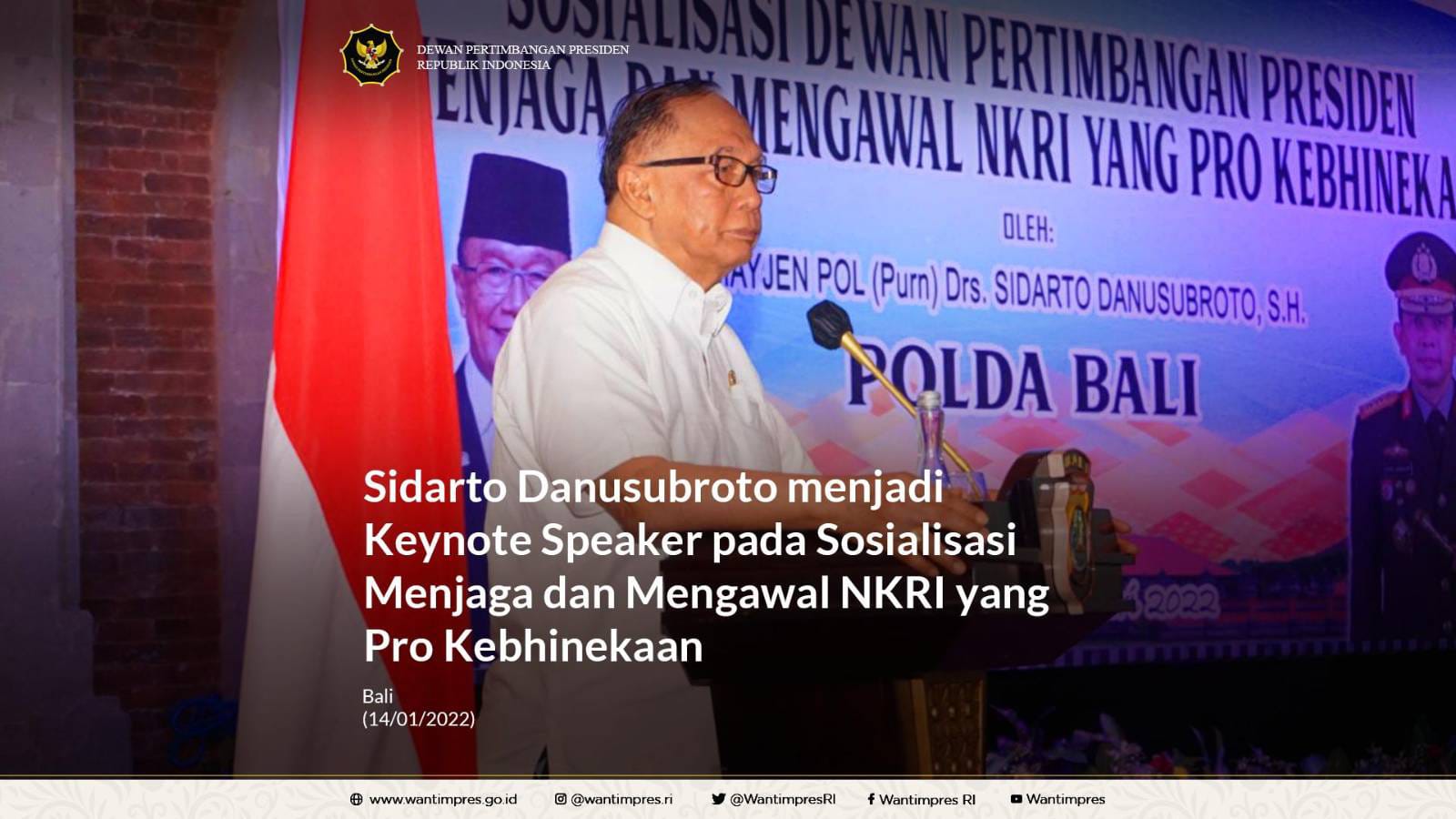 Sidarto Danusubroto, Member of the Presidential Advisory Council, was the Keynote Speaker at the “Maintaining and Guarding Pro-Diversity Homeland” socialization at the Perkasa Raga Garwita Building, Bali Police, on Friday, January 14, 2022.

Sidarto emphasized that diversity is a gift from the Almighty. Indonesia, which is pluralistic, multicultural, multi-ethnic, and multi-religious is a necessity that must be cared for and maintained in harmony. Indonesia’s diversity is a valuable asset that stores various local wealth which is the capital for the prosperity and welfare of the nation.

On the other hand, if it is not managed wisely, diversity can become a source of social conflict in society. Small and simple problems can become a big explosion that will threaten the integrity of the Unitary State of the Republic of Indonesia if not properly guarded.

Various attempts were made by certain parties to destroy harmony in Indonesia, by replacing the state ideology with another ideology. The form of the state wants to be changed into a form that suits them. Likewise, diversity is considered as something that must be removed from Indonesian soil. This condition occurs because there are groups who try to deny and forget the history of the founding of this Republic which was built on ethnic, ethnic and religious diversity.

The growth and spread of intolerance, radicalism and terrorism can be inhibited if the Indonesian nation has a solid foundation and strong fortress. We have a solid foundation and a strong fortress, namely the Four Pillars of Nationality: Pancasila as the State Foundation and way of life of the Indonesian Nation; the 1945 Constitution as the state constitution; The Unitary State of the Republic of Indonesia (NKRI) as a form of state which is the commitment of the entire Indonesian nation; and Bhinneka Tunggal Ika as the ideal value system in Indonesia. The Four Pillars of Nationality must be understood as a building, each of which has a different function but is a complete building that supports and complements each other. If it is likened to a house: Pancasila is the foundation or foundation; The 1945 Constitution is the pillar; The Unitary State of the Republic of Indonesia (NKRI) is the walls and roof, while Bhinneka Tunggal Ika is the content of the building which is very diverse. Furthermore, Sidarto Danususubroto said that the duties and responsibilities of Polri members were also very diverse. Give the best of the potential you have for the nation and state while still prioritizing a professional attitude, integrity, and positive character and based on good morals. The challenges faced are certainly not light. However, if they are guided by the PRECISION attitude which is the motto of the Police, the members will still stand firm and not be affected by the many problems, problems, challenges, and temptations in carrying out their service duties.