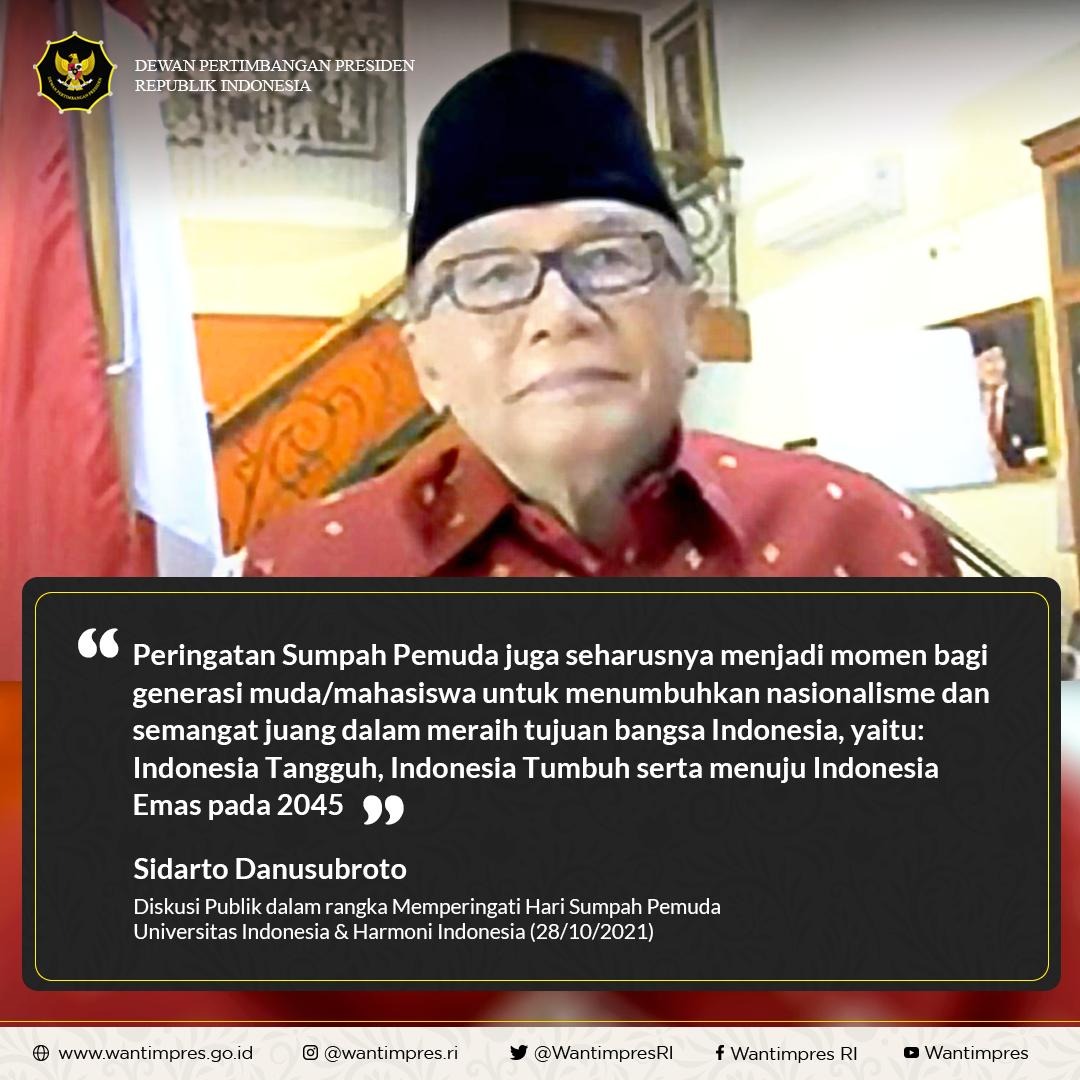 In commemoration of the 93rd Youth Pledge Day, Member of the Presidential Advisory Council, Sidarto Danusubroto who is also the Chairman of Harmoni Indonesia with the Minister of Youth Affairs and Sports, Zainudin Amali, was the keynote speaker at the Public Discussion with the theme Spirit of Building the Country in the Harmony of Indonesian Diversity, Thursday (28/10). The public discussion was held in collaboration with the University of Indonesia and Harmoni Indonesia.

The Chancellor of the University of Indonesia, Ari Kuncoro, officially opened the online public discussion. In his opening remarks, Ari Kuncoro said that the Youth Pledge in today’s era needs to be interpreted as part of the struggle to defend the independence and sovereignty of the Indonesian nation, unity and integrity, and apply the attitude of Bhinneka Tunggal Ika in everyday life.

The Minister of Youth Affairs and Sports, Zainudin Amali started his speech as a keynote speaker saying that the way to care for and keep the youth pledge to keep growing is to remember and promote that the Indonesian people are diverse. As a nation, there is a bond of common sense and the desire to unite in diversity is the capital of Indonesia’s existence to this day.

Furthermore, in his speech, Member of the Presidential Advisory Council, Sidarto Danusubroto conveyed that today is exactly 93 years of the Youth Pledge pledged by Indonesian youth at the Second Youth Congress, which is a determination and spirit of the movement towards Indonesia’s independence from foreign colonies, by stating the promise of one homeland, one nation and one language. “The Youth Pledge is one of the important milestones in the history of the Indonesian independence movement and is the starting point of the struggle of Indonesian youth, which fosters the spirit and commitment of youth in unity and oneness to escape colonialism,” said Sidarto.

The spirit of the youth who initiated the Youth Pledge 93 years ago should be a positive energy for the nation’s future generations to contribute and play an active role in accordance with their potential and abilities in building the nation in harmony with Indonesia’s diversity. “The commemoration of the Youth Pledge should also be a moment for the younger generation/students to foster nationalism and fighting spirit in achieving the goals of the Indonesian nation, namely: “Powerful Indonesia, Growing Indonesia and towards Golden Indonesia in 2045”, Sidarto’s message. (AIP)