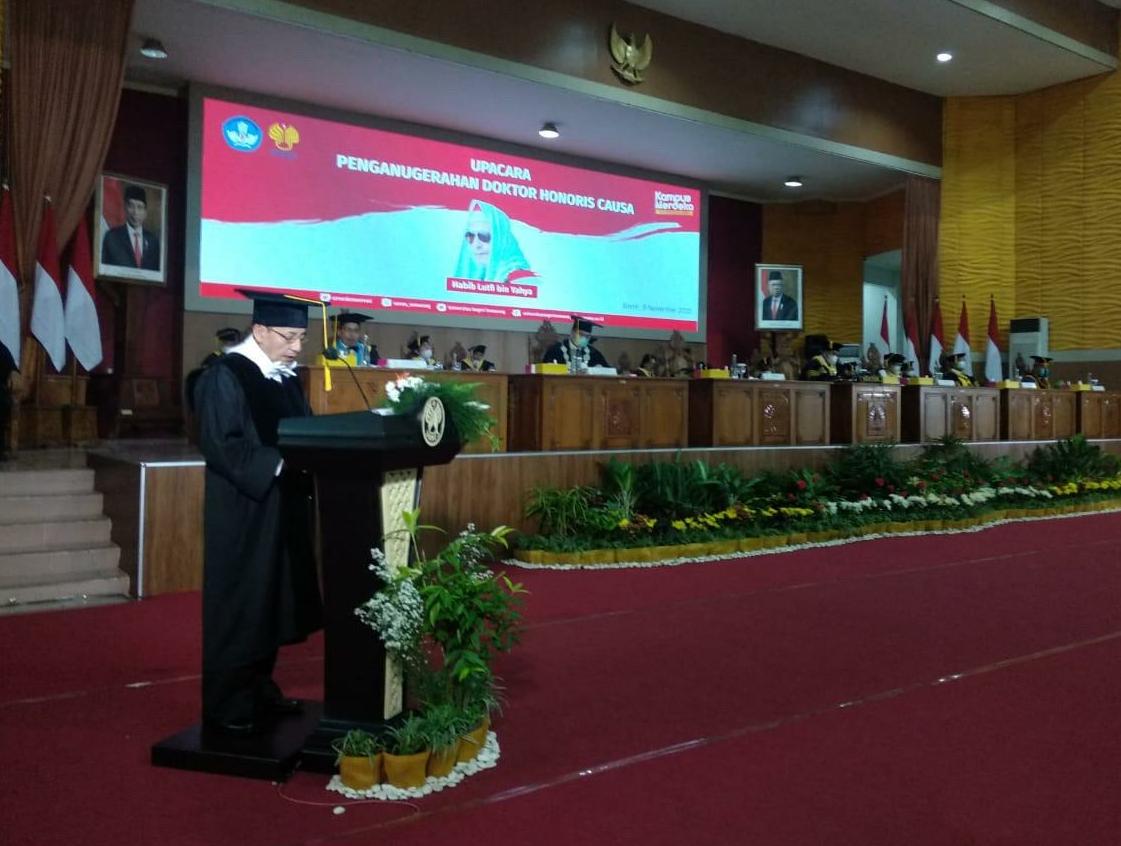 Muhammad Luthfi Ali Yahya, member of the Presidential Advisory Council received a Doctorate Honoris Causa from Unnes on 9th November 2020 at the auditorium of Prof. Wuryanto building. The member who is also an Islamic cleric from Pekalongan city has been known to contribute the empowerment of local Muslim community through da’wah (religious sermons) which evokes nationality spirit and nationalism.

President Joko Widodo has also congratulated Muhammad Luthfi Ali Yahya virtually. Jokowi said Habib Luthfi is a religious figure who provides examples of good preaching in the frame of love for the country.

“A charismatic cleric on the front line who call for love for the country in his attitudes and lectures, ” said Jokowi in the broadcasted video.

“The conferral of an Honorary Doctorate to Muhammad Luthfi Ali Yahya is a form of glorifying knowledge, respect, and pride for all of us to one of the scholars, teachers, and charismatic figures who has much contributed to the nation and state, especially in increasing the sense of nationalism through the art of preaching which reassures and reconciles Indonesia’s diversity, ” said the Rector of Unnes, Prof. Fathur Rokhman.

Muhammad Luthfi Ali Yahya received an honorary degree from the Unnes Postgraduate Language Education Study Program, on the field of Islamic Teaching Communication and National History. His religious sermons are considered able to bring three pillars of the community’s empowerment, namely religion, nationalism, and economic growth in an attractive manner.

In his scientific oration about Communication Strategies for Community Empowerment and National History, Muhammad Luthfi Ali Yahya demonstrated the implementation of technology and diversity since the Borobudur and Prambanan temples were built. Then he also talked about the openness of information, the large number of social media, and the use of language which affected the condition of religion, nation and state, as well as the spread of hoaxes and hate speeches which caused chaotic situations.

Muhammad Luthfi Ali Yahya also conveyed that a proper da’wah communication was needed as a unifying media and glue for the community. The role of communication is the main effects and influences in all forms of social relations.

“Therefore, preachers as one of the public figures need to convey things that do not deviate from the treasures of religion and state,” explained Habib Luthfi.

The Governor of Central Java, Ganjar Pranowo, who was present at the event, said that Habib Lutfi’s attitude is more than a doctorate degree. According to him, Habib Lutfi’s words and deeds are often used as examples.

The event was also attended by two member of the Presidential Advisory Council, H.R. Agung Laksono and Muhamad Mardiono,  Minister of Cooperatives and SMEs, Teten Masduki, Minister of Villages, Disadvantaged Areas and Transmigration, Abdul Halim Iskandar, Governor of Central Java, Ganjar Pranowo, Deputy Governor of Central Java, Taj Yasin, and other officials, a number of leaders from different religions and cultural practitioners. There were also the Ambassadors from Morocco and Egypt. (AM)