Muhammad Luthfi Ali Yahya, the Member of the Presidential Advisory Council, Visited Mosques and Churches to Campaign for Kebinekaan (diversity) 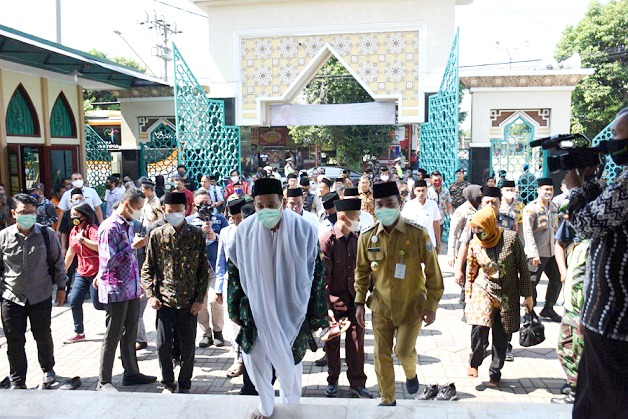 After Dhuhr prayer, Habib (religious title meaning beloved) Luthfi in his valuable advice stated that this is a momentous occasion of diversity. Mosques and other places of worship are the examples of the nation’s glue.

He asserted that the philosophical meaning of straight and dense rows (saf) during prayer is to look after each other, to help each other, and to help those in needs.

As a good citizen, if you do not want the unity of the nation disintegrated, you have to understand the meaning of diversity by strengthening the national unity, he added.

While, the Regent of Batang, Wihaji, said that the diversity is not just a word, it should be practiced. The visit of Habib Luthfi to mosques, churches, and other places of worship is an exemplary leadership. At the moment, the sense of unity is highly valuable, especially on the issue of inter-religion relations.

Along with the Regional Leadership Communication Forum (Forkompimda), the interfaith leaders, Habib Luthfi also visited the Javanese Christian Church (GKJ) in Batang. The priest of GKJ Batang, Andi Agung P, said that, as a religious leader, he will continue to guide the congregation to live in harmony and to foster the spirit of enthusiasm and peace to one another in the society. We are all united in diversity.  (AIP)