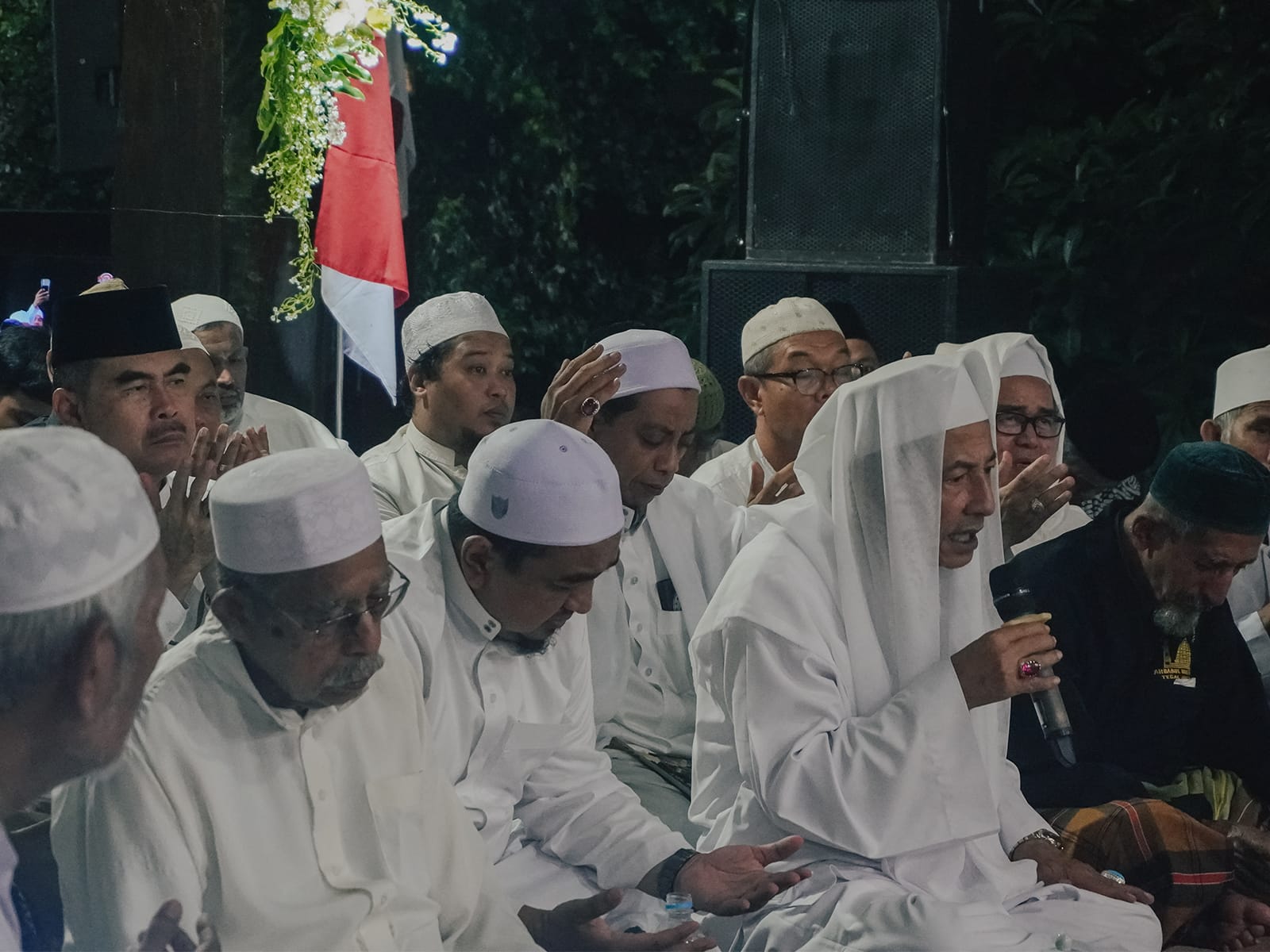 A member of the Presidential Advisory Council, Muhammad Luthfi Ali Yahya (Habib Luthfi), accompanied by Wantimpes Secretary Hasbullah Ahmad, attended the commemoration of the Maulid of Prophet Muhammad SAW on Tuesday (20/12) at the residence of Haji Supandi, a Tegal district community leader. The Maulid activity was the culmination of a series of previous events, such as the National Ceremony, Merah Putih Carnival, Javanese Gending Prayer, Maulid Marriage, Exhibition, and Bazaar for UMKM throughout Tegal Regency.

The Regent of Tegal in his speech gave special appreciation to Habib Luthfi, who always encouraged him to continue holding the Maulid of the Prophet Muhammad SAW without having to wait for the Maulid month, Rabiul Awwal. Maulid Nabi can be held at any time, and it is proven that every Maulid Nabi celebration always brings peace and blessings to the people, especially the residents of Tegal Regency. Even though it was raining, the community members’ enthusiastic presence demonstrated their love not only for Rasulullah SAW but also for the descendants of Rasulullah SAW.

Meanwhile, before saying the closing prayer for the Maulid, Habib Luthfi conveyed the message that the Maulid celebration should not be used as an event for show and display just to show off the large number of worshipers. The very basic thing about commemorating the birthday of the Prophet SAW is our obligation to imitate the morals and behavior of the Prophet Muhammad, who is full of love. If we love and obey Allah SWT, then the door must be opened through our mahabbah (love) for Rasulullah SAW. Loving the Messenger of Allah is the door to having to love his descendants (dzuriyah) and the scholars who inherit him. In turn, love for Rasulullah SAW must be manifested with love for the motherland and its people. If we love our scholars and teachers, it is our duty to look after them, not to talk about their disgrace. Likewise, if we love our homeland, it is forbidden for us to reveal the disgrace of our own nation. That is Islamic teaching and the message we can take from this Maulid celebration.

Habib Luthfi also reminded that the blessings that Tegal currently has are inseparable from the role of the former Habaib and Ulama, who were the main sponsors, so that currently the people love Rasulullah SAW. Habib Luthfi closed Maulid by praying for the safety of Indonesian leaders and the nation.

At the commemoration of the Maulid of Prophet Muhammad SAW, Maulid Simtudduror and sholawat were also read, led by Habib Ali Zainal Abidin, the leader of the Azzahir Council, Pekalongan, who is also the son-in-law of Habib Luthfi. Apart from being attended by the Regent of Tegal, officials from the TNI/Polri, Forkopimda for Tegal Regency, Habaib, Kyai, and Ulama from various regions were also present.