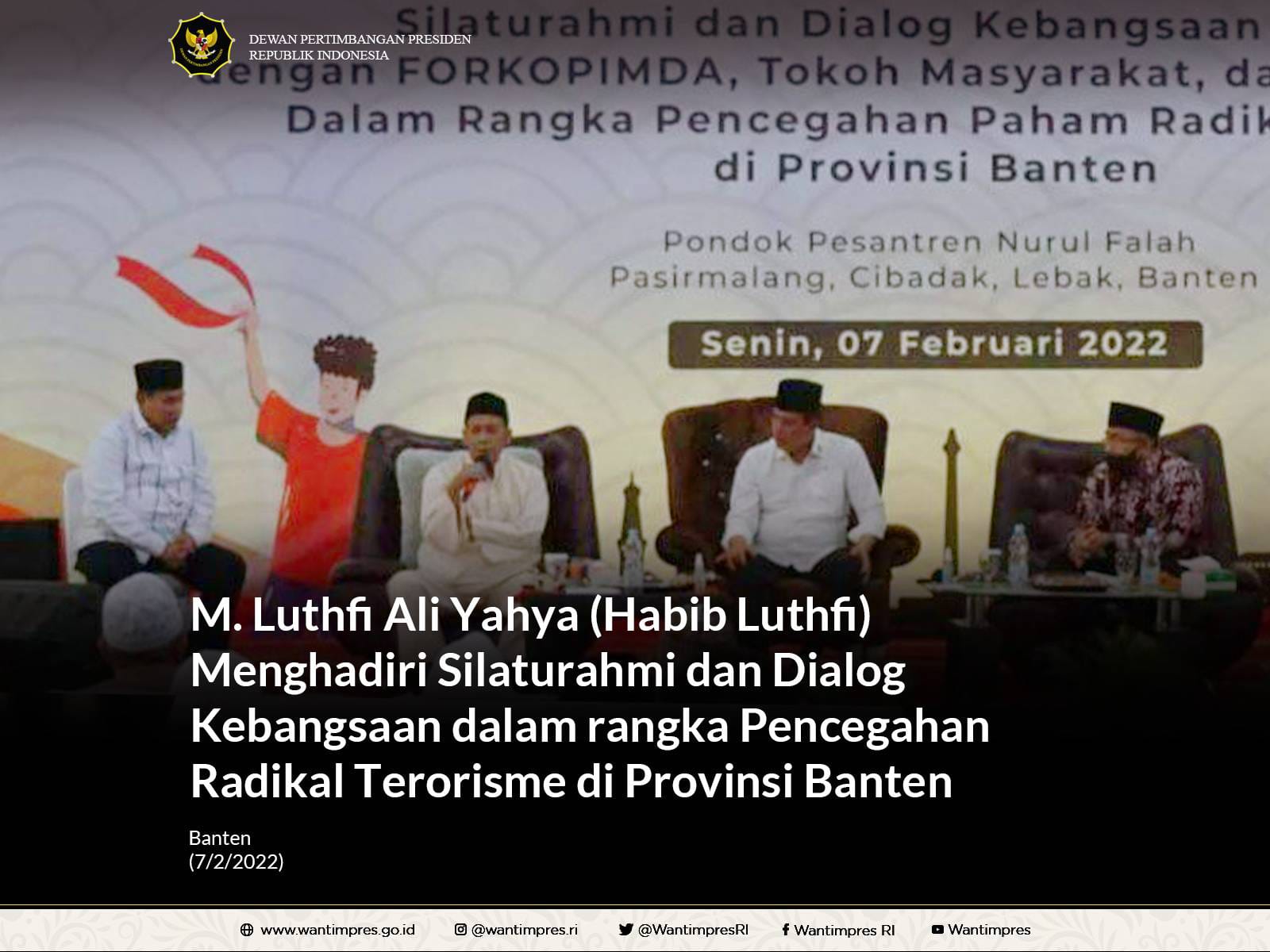 Member of the Presidential Advisory Council, M. Luthfi Ali Yahya (Habib Luthfi) was present and gave a speech at the Gathering and National Dialogue in the context of Preventing Radical Terrorism in Banten Province. The event was initiated by the National Counterterrorism Agency (BNPT) together with the Nurul Falah Islamic Boarding School which was held on (7/02) at the Nurul Falah Islamic Boarding School, Lebak, Banten.

In addition, Habib Luthfi also conveyed the importance of cultivating love for the homeland for the younger generation, that in singing the National Anthem of Indonesia Raya, it is not just a string of words, but in it there is a pledge, to what extent is the statement of Indonesia my homeland. “I am Indonesian, I am an Indonesian nation, I love Indonesia, because the phrase Indonesia My Homeland has been attached to every young generation,” said Habib.

BNPT has a routine agenda of national dialogue which aims to invite all parties, especially religious leaders and community leaders, to prevent radical understanding of terrorism.

Head of BNPT, Komjen Pol. Boy Rafli Amar likens radical understanding of terrorism to a dangerous virus like Covid-19. People who are exposed to intolerant radicalism may not have certain signs and attitudes. In preventing the radical virus of terrorism, the national values that exist in the four national consensus, namely the 1945 Constitution, Pancasila, Bhinneka Tunggal Ika and the Unitary State of the Republic of Indonesia must continue to be inflamed, especially in the space of national dialogue. “If society, young Indonesians are not strong in their ideological aspects, many young people will be exposed,” concluded Boy.

On the same occasion, the Deputy Governor of Banten, Andika Hazrumy, fully supports the National Dialogue activities in the Banten region. Understanding that BNPT already has a strong map, analysis and profiling in each region, which areas have great potential will be an indication of the existence of radicalism. “From the context of BNPT’s performance, Banten Province is ready to collaborate in the context of understanding digital literacy,” said Andika.

As the host, the leader of the Nurul Falah Islamic Boarding School, KH Ahmad Rafiudin, supported the role of BNPT and stated that the Unitary State of the Republic of Indonesia is above all, the nail of the earth of the Republic of Indonesia is Banten and NU is a fortress of defense, as long as there is NU we are brothers and sisters in prosperous harmony. In addition to the Head of BNPT and the Deputy Governor of Banten, the Gathering and National Dialogue were also attended by Member of Commission III DPR RI, Adde Rosi Khoerunnisa, Regent of Lebak, Hj. Iti Octavia Jayabaya, Danrem 064/MY, Brigadier General Yunianto, Director of Binmas Polda Banten, Kombes Pol, Sofwan Hermanto, Chair of MUI Banten Province and Lebak Regency. Also attending were Alim Ulama, Habaib, Kyai, Ustadz, Religious Leaders, Community Leaders and Head of Ormas. (AIP)